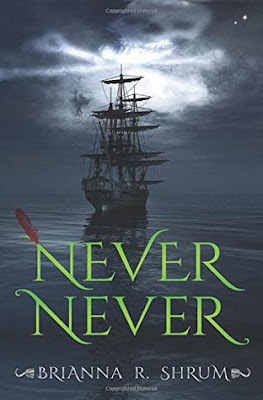 James Hook is a child who only wants to grow up. When he meets Peter Pan, a boy who loves to pretend and is intent on never becoming a man, James decides he could try being a child - at least briefly. James joins Peter Pan on a holiday to Neverland, a place of adventure created by children's dreams, but Neverland is not for the faint of heart. Soon James finds himself longing for home, determined that he is destined to be a man. But Peter refuses to take him back, leaving James trapped in a world just beyond the one he loves. A world where children are to never grow up. But grow up he does. And thus begins the epic adventure of a Lost Boy and a Pirate. This story isn't about Peter Pan; it's about the boy whose life he stole. It's about a man in a world that hates men. It's about the feared Captain James Hook and his passionate quest to kill the Pan, an impossible feat in a magical land where everyone loves Peter Pan. Except one.

When I tell you I almost did not read this book...I was about to stop, but then there was this voice in my head saying "No. You need to continue," so I did. Thank God I did because this book was excellent! I had some real doubts about it, especially since the first part of the book is a little slow, but the story eventually picked up speed and turned into something magical.


If you can't already tell, this story is a Peter Pan retelling. I never really had a love for the original Peter Pan plot line, but I was interested in reading this story to see the twist it gave to such an old tale. This book is interesting in that it tells the story from Captian Hooks point of view starting from him as a young boy to him becoming a fearless pirate in Neverland. As for the setting, Neverland, it is like a nightmare and a fanciful dream all in one. Brianna Shrum's writing style is very fluid and descriptive which allowed me to completely get lost in the wonderfully horrible world of Neverland. It is one of those places that is best when it stays in fiction and dreams because I'd rather not find myself living there or else I would probably lose my sanity.

Did I mention Shrum is a master at character development? James Hook was such an elaborate main character and all of his experiences actually aided in his character development. Therefore by the time the reader gets to see what Hook has become in the end, it all makes sense. Throughout the story we see Hook evolve from a dreamer to a lost boy to a Captain to The Captain Hook, and then something even darker. It has been a while since I've read a YA novel with this level of main character development, and it was so refreshing to see it done so well. The side characters did not develop as much as James Hook, but based on the setting and plot, it still felt like enough. James Hook was also a great character because it was surprisingly easy to connect and empathize with him. When he felt betrayed, I felt betrayed. When he felt upset and lost, I felt upset and lost. (I'm sure you get the picture here)

There definitely was also quite a bit of romance in this novel, and it got pretty steamy in some scenes. This was very unexpected, but one of the best surprises because the romantic relationship was one of my favorite things about this novel. The relationship is very flawed, but this was well called for and fit in the story. Another thing I really enjoyed about this novel is the ending. Towards the last 50 pages of the story, I was completely hooked and in love with the book, but I was a little nervous for the ending. All I wanted was a decent ending to really tie the knot and guarantee this book's greatness, and instead, I got...A PERFECT ENDING! Endings are very important to me as a reader, and they can honestly make or break a book. Brianna Shrum created one of my favorite types endings which brought a conclusion to the plot yet leaves you wanting more.