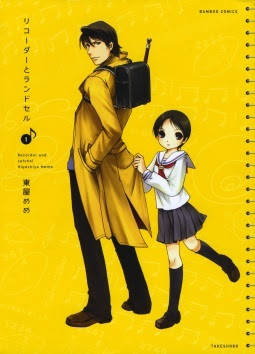 Miyagawa Atsumi and her younger brother Atsushi are your typical siblings - she's a high school sophomore dealing with exams, he's a 5th grader who only wants to run off and play with his friends. School's hard enough as it is, but things are even tougher for these two: Atsumi is so tiny she's still mistaken for a little kid, while Atsushi is so tall people assume he's a full-grown man!

*Thank you Takeshobo for sending me a copy of this book through Netgalley in exchange for an honest review.*

Recorder and Randsell is a manga (Japaneses styled graphic novel) about a girl named Atsumi who is extremely short for a sophomore in high school and her brother Atsushi who is extremely tall for a kid in 5th grade. You can definitely tell this by the novel cover. For the sake of this review, to make the names less confusing, I will refer to the girl as Nee-chan (which is what her brother calls her) and I will refer to the brother as Atsushi.

Atsushi is a very interesting character because he looks like a grown man but acts like a 5th grader or even younger. People treat him like an adult even though he is really a child. For him, doing normal childish things causes him to get weird stares in public and even get arrested. Nee-chan on the other hand, looks as if she could be in the 5th grade even though she is older. She acts like a responsible older sister but is often mistaken to be the younger child. Nee-chan and Atsushi run into a lot of struggles and funny situations because of their condition and I could not help laughing at many points throughout the manga.

This manga reads like an anime. The way the events flowed made it feel like I was watching a show and each chapter was like a new episode. At first the book was a little hard for me to read because of the positioning of boxes on the page and what order they were supposed to be read in. I am used to the manga style of reading from right to left, but the way this one was ordered was a little different. But after I figured it out, I quickly got the hang of it. This manga is really meant to be a light and fun read. There is nothing very complex about it and I finished it in no time at all. The main joke about the height of Nee-chan and Atsushi was held throughout the manga and I thought it would start to get repetitive, but surprisingly it did not. It was all well formulated to where it was still funny by the end of the book. Well let me not forget to mention the art style. It was nice and just like any normal, classic manga style.

Conclusion: This manga was a great read that made me laugh quite a bit and put me in a good mood. It is simple, but effective and I enjoyed it a lot. I am looking forward to what's in store for Volume 2.

So tell me: Anyone have a younger sibling/friend whose taller than them? Is this idea bothersome?