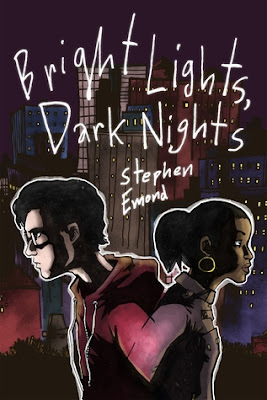 A story about first love, first fights, and finding yourself in a messed up world, from the acclaimed author of Happyface.

Walter Wilcox has never been in love. That is, until he meets Naomi, and sparks, and clever jokes, fly. But when his cop dad is caught in a racial profiling scandal, Walter and Naomi, who is African American, are called out at school, home, and online. Can their bond (and mutual love of the Foo Fighters) keep them together?

With black-and-white illustrations throughout and a heartfelt, humorous voice, Bright Lights, Dark Nights authentically captures just how tough first love can be...and why it's worth fighting for.

What I expected it to be: A cute contemporary novel with a biracial Romeo and Juliet story line

What it actually was: The story of Walter and Naomi's romance and the threatening reality of racism and controversial opinions that affect our society.

Bright Lights, Dark Nights takes place in an urban city where Walter now lives with his father ever since his mom ran off to marry someone else. Walter is Caucasian and his father is a cop who's actions one day flare a lot of controversy and backlash across the news and internet. Naomi, who is the sister of Walter's friend Jason and the daughter of strict, protective parents, happens to be African American. When Walter and Naomi begin to fall for each other, they find that extreme public opinions can cause their love story to not play out as simply as they might have wished.

Reading about this couple was very refreshing. It is rare to find young adult books with a diverse set of white and black character without it feeling like the author is being stereotypical. I really appreciate Stephen Emond for foregoing the racial stereotypes and creating genuine characters. Walter is a very passive, yet a kind and thoughtful character. It was easy for me to relate to him and he even reminded me of myself at times. On the other hand, Naomi is passionate, brave and free spirited, but put together the two have great chemistry. Many of Walter and Naomi's scenes together (especially their first romantic scenes) were very awkward, but the imperfections in their relationship really made their love story feel realistic and not overdone.

Walter's character developed beautifully as he had to move on from past problems at home and even come to terms with his own naivety and opinions on the events taking place. The character development for Naomi was very good as well. Even all the supporting characters and Walter's friends were well thought out and unique. When Walter had his final resolution with his peers towards the end, it did feel like it played out a little "too well," but I do have to admit that I was very relieved when it ended positively.

I really enjoyed how the author portrayed racism and controversy in its most modern sense. The inclusion of what people were saying on social media and how the whole conflict played out made the whole book very authentic and relevant. Police racism and their abuse of power is such a current and hot discussion in our society today. It was nice that this book dove right into it. Walter's dad is accused of racial discrimination and he is very much in denial of it. This along with Walter dating a girl who is black causes a lot of attention and even threats that begin to cause chaos in Walter and Naomi's life. Even though to the public the biracial couple seemed to be an issue, Emond does a great job of making the reader feel and believe that it is really no issue at all. They are just the same as any other young couple deeply in love. On top of all of this, the book has a lot of wonderful illustrations in it and Emond has a beautiful writing style that describes city life so well!

The Conclusion: I very much enjoyed this book and it does a great job of covering current topics. It is definitely one of those diverse books you will want to read and a very unique, refreshing addition to the young adult genre.

Cover Rating:
3 out of 3 stars