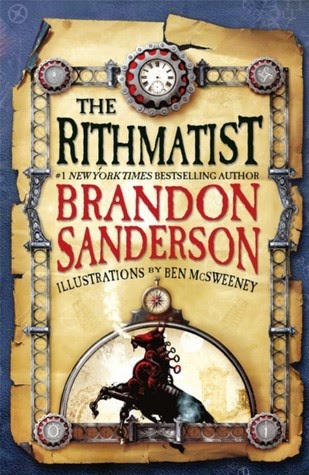 More than anything, Joel wants to be a Rithmatist. Chosen by the Master in a mysterious inception ceremony, Rithmatists have the power to infuse life into two-dimensional figures known as Chalklings. Rithmatists are humanity’s only defense against the Wild Chalklings — merciless creatures that leave mangled corpses in their wake. Having nearly overrun the territory of Nebrask, the Wild Chalklings now threaten all of the American Isles.

As the son of a lowly chalkmaker at Armedius Academy, Joel can only watch as Rithmatist students study the magical art that he would do anything to practice. Then students start disappearing — kidnapped from their rooms at night, leaving trails of blood. Assigned to help the professor who is investigating the crimes, Joel and his friend Melody find themselves on the trail of an unexpected discovery — one that will change Rithmatics — and their world — forever.


Let me just say that this is one of the most awesome fantasy books I have read in a long time. The world in this book is beyond amazing! The book is set in the United Isles of America. The main character Joel lives on the isle called New Britannia where he goes to a school name Armedius Academy. Basically in this world we have Rithmatist who have the power to make certain creation and defenses drawn by chalk come to life. Then we have the non-Rithmatists, like Joel who do not have this special ability. Joel is different from most non-Rithmatist at his age because he has a strong passion for Rithmatics and is naturally talented at understanding all the different aspects of their abilities. The concept of Rithmatics is very well developed in the story and explained in a way that is relatively easy to comprehend. I liked how Rithmatics had rules and guidelines which were similar to geometry. This book contains pictures which made the plot much easier to understand because you can actually see what is being talked about or explained.

Joel is a great main character. The reader can tell that he is very smart and gifted in Rithmatics, but you can see he also has flaws. Because of this, it is easy to relate to him and you can tell he is still a normal 16 year old. He fails his classes, experiences rejection, and questions his beliefs. Throughout the book, you are able to see his character develop as he gets around all his obstacles. His friend Melody also learns to overcome her own problems too along with Joel. By the end of the book, Melody and Joel built themselves a great friendship. There were so many times when their dialogue made me smile and even laugh out loud.

Towards the middle and end, the book started to get quite a mystery, crime, and thriller novel feel to it with fantasy aspects still mixed in. I loved this about the book. There were points were I would get nervous or scared because of the shocking events unraveling before me. I could never have guessed how the book would end, but I know now that the ending was amazing and that I am very ready for a sequel.