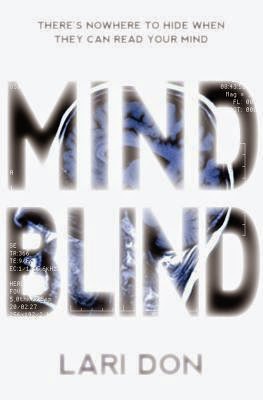 
“I killed a girl today, just after the school bell. I keep trying to tell myself I didn’t really kill her. But she’s dead. And it’s my fault.”
Fourteen-year-old Ciaran Bane is a highly trained fighter and gifted cat burglar with a special talent—he knows what his victim is thinking. He works in a mafia-style family of gangsters, thieves, and thugs who share his mind-reading talent. But Ciaran’s skill comes with a crippling side-effect, one that makes him disposable—even to his own family.
Then he meets Lucy, whose older sister has been kidnapped, and they form an unlikely team. But on their perilous search across London and up to Edinburgh, on the run from MI5 and Ciaran’s dangerous family, can they ever trust each other? And where can they hide if they aren’t even safe in their own minds?


The Plot and Characters

Our two main characters in this book are Ciaran Bain and Lucy Shaw. Ciaran and his family are mindreaders who are trying to keep their special powers secret from the public and the law. Lucy is the daughter from the Shaw family who is trying to piece together her sister Vivien's mysterious death while also protecting herself and her family. Ciaran's family and Lucy's family are linked together because of the dangerous information the Shaws have on Ciaran's family. Ciaran is very talented at mindreading through touch, but because of this he is also the most sensitive especially when he is around people who are suffering. Lucy, on the other hand, is very curious, bold, and vengeful because of her sister's death. Together they have to work together to retrieve the secret information from the Shaw family and at the same time try to save themselves and their families.
In the majority of the book, Lucy's an Ciaran's relationship is not a very friendly one. Lucy is very bitter and determined to get revenge for her sister's death while Ciaran is out to prove something to himself and his family. Throughout the journey, none of them really trust each other, but I did like how their relationship developed at the end. Ciaran and Lucy definitely did not have a romantic relationship and their was not really any romance in the story. Nevertheless, I still enjoyed it. There was never a dull moment and the story was very fast-paced. Most of the book's plot consisted of a big chase and nothing was predictable.

This book is set in London and Scotland which made it very unique. The author Lari Don is Scottish so that could be part of the reason, but the book had a lot of British language in it. Words such as "daft" and "bloody" were used many times. Also their were a lot of words like practicing which was spelled like "practising" with an s instead of a c. I actually quite enjoyed this and found it very interesting.
The story is told in two perspectives, Lucy's and Ciaran's. This was done very well and I could actually tell the difference between the two and their personalities. It was nice seeing the thoughts and opinions of two different people. Along with that the dialogue between to two was great and it portrayed how their characters and relationship developed well.

This book is a great Young Adult Thriller that you can just fly through. I really enjoyed it and I felt the ending was a little open ended, but still satisfying. I am not sure if their will be a second book, but if there was one I  would not hesitate to pick it up

I think the cover of this book looks pretty cool. It caught my eye when I first saw it. Inside of the words Mindblind you can see the inside of a human brain. The cover actually makes the book look a bit sci-fi which I guess in some ways the book can be described as this. The word Mindblind is actually the name in the book used for normal people who do not have the power to read minds.