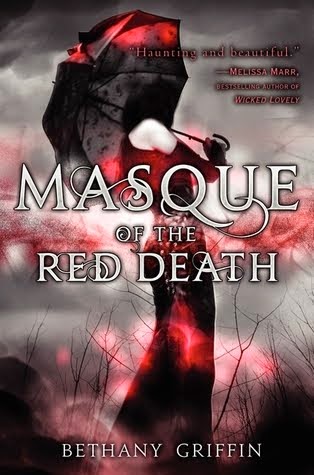 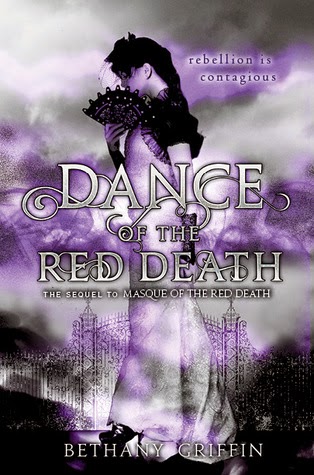 Masque of the Red Death

A plague has hit the city leaving all of its inhabitants fearing an inevitable death until Araby's Father invents a mask to prevent the extinction of their city and a rebellion stirs up all around.

Now let's just start by clearing something up. If you look at the cover of this book and think it is going to be some creepy, Edgar Allen Poe like version of crime, death, and tragedy that will bring chills up your spine while reading it then well..... this is the book for you.

The beginning of the book was actually quite slow for me and some of the parts could have been explained better. The characters were really a weird mix. Usually I'm pretty sure about my feelings towards a character at least by the middle of a book, but with this one, I was not quite sure of which characters I genuinely liked, cared about, or trusted. Again, another YA novel that has a love triangle in it. This love triangle was not one of my favorites but it did bring me many of the emotional pains love triangles usually bring readers and by the end I really did not know who I actually wanted the main character, Araby, to be with. One thing I really liked was that all the characters good and bad had their own history and dark side.

Even though the beginning seemed slow and uneventful, I really enjoyed reading the last 100 pages of the book. The book really improved by the end and got quite intense and suspenseful. The real action actually began at the end of the book and the ending was actually very unexpected which I quite liked. By the end of the book, I was ready and eager to pick up the second one.

The world building in this book was very interesting. At the end I was left with all these questions that were left unanswered. For example, I really wish I could have learned more about the setting of the book, like what the city is called or in what part of the world we are in. Also, I was having trouble figuring out the time period the plot took place in, but I'm pretty sure it takes place in the past. I also wish I knew more about the actual history of the setting, but I believe all these unanswered questions just added to the mysterious and eerie tone throughout the book. The characters in the book were also very mysterious and I found that by the end, I still really knew little about a lot of the major characters.

All in all I did have a few issues with the book while reading it, but these issues were not enough to make the book not interesting or not enjoyable to read. Its ending really improved my opinion of the book. I would really recommend it to those who would like a darker, mysterious, and almost steam-punk dystopian YA novel. After finishing the book, I could not wait to start the sequel


Dance of the Red Death

Now I'm not going to say much about the plot for those of you who have not read the first book, but basically, I liked this book better than its first book. The book was way more action packed and intense. I felt myself feeling constantly nervous that something bad was going to happen. The romantic relationships between the characters were both great and heartbreaking. Towards the middle of the book I actually began to feel quite hopeless for the characters. I still did not trust many of them in this book either. After page 250 though, the plot and story line seemed to stop making sense to me and sometimes I got confused as to why certain people were where they were and why certain actions took place. The endin in this book was not really a happy one, but it is a satisfying one.

I also read the novella which is book 1.5 and thoroughly enjoyed it because it gave more information on April and Elliot's childhood and how their lives intertwined with Kent's.

Basically this series is very unique and fun to read. It is a darker and more intense YA novel and I suggest you check it out.

Now my questions for you to think about are:

Have you ever considered what living during the time of a deadly plague would be like? How would you try to prevent yourself and those you care about from getting sick?

Also I would love to hear your own thoughts on this book in the comments!