I just finished this book yesterday and I wanted to post a review as soon as possible. I hope you enjoy! ;) 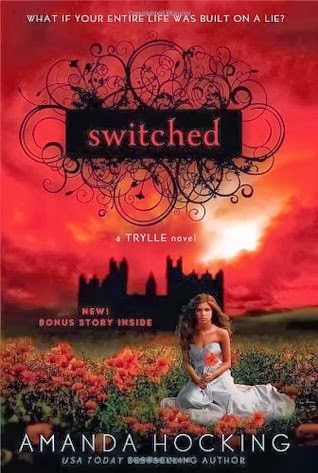 Switched is the first book in Amanda Hocking's the Trylle Series. The story is told in first person by our main character Wendy who thinks she is just a normal teenage girl, but is actually a Trylle. One of the supporting characters named Finn, takes Wendy to the land of Forening where she finds out she is actually a Princess who has been switched at birth. But since she has returned to the land of the Trylle, she has to learn what it takes to be the powerful ruler of Forening that everyone says she has to be.


The synopsis is really what caught my eye about this book. The characters are definitely a very interesting bunch. Our main character Wendy throughout the book is just very confused and struggling to adapt to the new life that has been put in front of her. I sense potential in her to development into another very strong YA female character in the next books in the series. The character that I loved the most and felt the most sympathy for, was Rhys though, who is a manks (the book explains this term and its connotations later on). He is just one of those cute and funny male characters that you can't help but love. He made me grin multiple times during this book. The character development, I feel was well done. Wendy, Finn, and Rhys all grew as characters and by the end of the book, I had a new understanding of all of them. Again, we quite often in YA books have that mysterious, sexy boy that the female main character always seems to be attracted to. In this book, that boy was Finn, who was very good at hiding his emotions and being fairly irksome in the beginning, but by the end you see his true feelings come out and I started to actually really like him. Even though, I still think that something about him is not quite right (or maybe its just me?).

The writing style was nice. It really allowed me to gain a good understanding of Wendy's feelings and thoughts. The plot line of the story really reminded me of a paranormal version of the Princess Diaries by Meg Cabot, which I read two years ago and thoroughly enjoyed. The book left a lot of unanswered questions for me. There is this secret that everyone seems to be keeping from the main character and I am foreshadowing it will cause a real turn of events in the next books in this trilogy.I do kind of wish there had been a little bit more world building in the story because the idea of this Trylle world in general is very unique and interesting, but by the end of the book I still did not have a very good picture of the world of Forening was. Its okay though, because I think this was done by design and Amanda Hocking was setting up for the next books.The ending was really when the story dove into the action and it was honestly pretty nerve racking. The last few pages were not the ending I was expecting, and it has made me very unsure about the events that will take place in the second book Torn, but I really want to read it soon.

All in all the book was amazing! I really enjoyed it and I gave it a 4 out of 5 star rating on goodreads. I am excited to see where this trilogy will end up.Comment below your thoughts, and if you have read the book or would like too.

Have a spectacular day!