Today I have an interview for you guys with an author by the name of J.D. Selmser. He has written the books Stealing Destiny and Saving Destiny in the Immortal Obsession series. Here is information on both books. 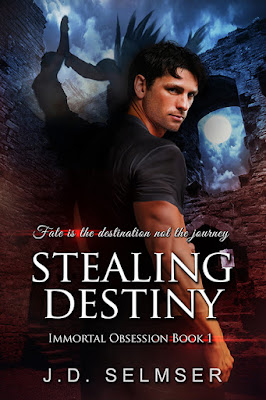 It took one kiss for Destiny to steal his heart and Damien lived his life for another one from the woman he loved. If he only knew that that one kiss would lead to his death and eternal damnation, would he still have kissed her? In one mere second of time, Damien loses his life because of a supernatural twist. On a stormy night in the back roads of nowhere his car careens out of control and into a field claiming his life. Suddenly, everything he ever thought about heaven, hell and angels takes on a whole new meaning as he struggles to get his life back. Falling from heaven, Zahir makes the ultimate sacrifice but who is to benefit from it? When Zahir stole Damien’s future, his destiny and his body, he decides it’s time to steal it back. But then he is offered a choice between the life he was destined to live and the one Death offers him, putting him at a crossroad. Damien wants to make the best choice he can so that he can carry out his plans to marry Destiny. However, what Damien fails to recognize is that getting his life back is going to take him into a whole new dimension of what the afterlife means. In every lovers triangle there has to be someone who loses. No romance ever truly sees the happily ever after. One fell from heaven, someone is headed for hell and Destiny is the prize. When your heart and soul hang in the balance, is there ever really any second chances? 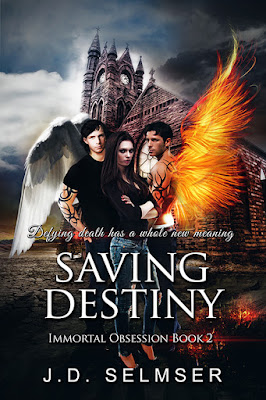 It’s been six months since Damien Douglas’s life turned upside down. Since the night that Destiny’s guardian Angel, Zahir, decided he wanted Damien’s life and stole it from him, none of their lives have been the same. The constant fear that Death will come for the baby growing in Destiny’s belly leaves everyone on edge. Zahir, regretting his decisions, wants to redeem himself but can’t find forgiveness from anyone and he desperately wants to protect Innocence, the daughter Damien will raise.
However, the powers that Damien inherited from Zahir’s bad choices are now becoming too much for his humanity to handle. As Angels, Death, and humans battle it out in a war between heaven, hell and earth, the saga continues as Damien tries everything in his power to protect the one thing he always wanted: his family. Will it be too much for him to handle? Will saving his family at any cost be a bigger price than he is willing to pay? Find out in the continuation of the battle between life and death as Destiny and Damien’s stories continue taking them onto a path that they may someday come to regret.

Thank you J.D. Selmser for participating in this interview. Here are the 12 questions I asked him.

What are three words you would use to describe yourself?
Romantic, dreamer, loyal

What is it that you value the most?
Family

How did the idea of writing the Immortal Obsession series come about?
I really started out just wanting to write a simple love story. The idea that everybody has that there is one special person out there if they only have the courage to search, they will find them. Before I knew it became the idea of; What if your guardian Angel loved you so much he would actually kill to have you? I also wondered what if we truly only have one soul mate what would happen if your soul mate refused to die?

What would you say is the most challenging part about writing a paranormal novel?
You have to pull from your imagination while keeping the characters relatable because there are very few tangible things to help you along.

How would you describe the books’ main character?
Damien is fiercely loyal to the point of stupidity. He is in love with the idea of being in love and it forces him to make extreme sacrifices.

Zahir is like a powerful toddler. He starts off with the best intentions, but when he wants something he just takes it without any thought to the consequences.

Which scene was the most fun to write about?
Actually Damien’s car accident. It was the most complicated scene to write also because I was trying to capture the feelings through my own car accident experience, but it was also the most fun. Not the accident, but adding an experience from my life into my book then exaggerating it was a fun challenge.

If you could read only one book for the rest of your life, what would it be?
I think it would have to be Dale Carnegie's, “How to Win Friends and Influence People”. I am a shy and rather awkward person and this book has really helped me around people.

If you could pick any profession other than being a writer, what would it be?
I would continue to work at my current day job. Luckily I love challenges so my current job in IT offers everything I want in life. Well except twenty free weeks to travel and see the world, but I will see it in smaller chunks.

What is the one thing you would hope your readers would get out of reading your books?
My books are there for entertainment. I do have solid themes such as love, friendship, loyalty and hope that readers walk away with a sense of hope that everybody deserves love and true companionship.

Last but not least, are there any current projects you are working on that you would like to share with us?
I have always got a million ideas bouncing around. Currently I am working on the third book in my Immortal Obsession series where I get to follow Damien’s journey towards madness. I am also starting a new series called Dark Origins. Surprisingly fans asked about the backstory for my character's Death and Raven and Bane.