To This Day by Shane Koyczan ~ Impeccable Reviews 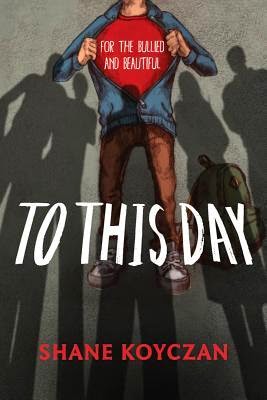 
An authentic rallying cry for anyone who has been affected by bullying.
In February 2013, Shane Koyczan's passionate anti-bullying poem "To This Day" electrified the world. An animated video of the lyric narrative went viral, racking up over 12 million hits to date and inspiring an international movement against bullying in schools. Shane later performed the piece to sustained applause on the stage of the 2013 annual TED Conference.
Now this extraordinary work has been adapted into an equally moving and visually arresting book. Thirty international artists, as diverse as they are talented, have been inspired to create exceptional art to accompany "To This Day." Each page is a vibrant collage of images, colors and words that will resonate powerfully with anyone who has experienced bullying themselves, whether as a victim, observer, or participant.


Born of Shane's own experiences of being bullied as a child, To This Day expresses the profound and lasting effect of bullying on an individual, while affirming the strength and inner resources that allow people to move beyond the experience. A heartfelt preface and afterword, along with resources for kids affected by bullying, make this book an invaluable centerpiece of the anti-bullying movement.

This book is truly mesmerizing! It is essentially a poem in book form with pictures, but really it is a lot more than just that. At the beginning of the book, we get to know the author's story a little bit better and see how this poem first came about. At the end, we also get a continuation of this story and how Shane's poem effected so many people. Mixed in to these sections of the book were facts about bullying and quotes from the illustrators about their own experiences with the topic, which I very much enjoyed. The illustrations were phenomenal. They really added so much to the message of the book. Since there were many illustrators that contributed to the poem, each part of the book was very different and unique, but still just as powerful. Half of the time I took reading this book was spent staring at all the beautifully detailed pictures that filled each page.

But lets not forget the actually words on the page because those were not lacking in beauty at all either. What makes this poem so heartfelt is how easily you can relate to it. Even if you would like to claim that you have never been bullied before, everyone has been called a hurtful name before and everyone has at some point in time felt like they don't belong or fit in. This poem speaks about all these issues and more.This poem is not only a book for the victims, but also for the bullies themselves and the bystanders as well. It is not just a poem to make people feel sorry for victims of bullying, but it is meant to strengthen them. It is meant to tell them that they are not alone, that there is hope, and to never give up because all those cruel thing that have been said or done to you do not define you. This is a book I definitely want on my shelf so I can pick it up and read it whenever I want to feel inspired and empowered. It is such a quick and easy book to flip through in 10 minutes or less and once you have read it through once, you will want to read it again and again.

"...we are not what we were called
we are not abandoned cars stalled out
and sitting empty on a highway
and if in some way we are
don't worry
we only got out to walk and get gas"