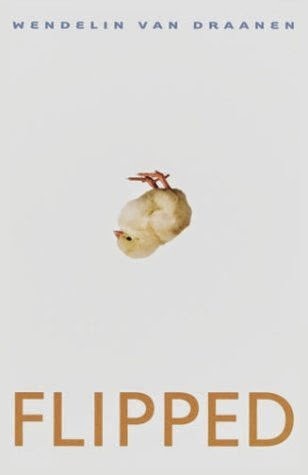 Flipped is a romance told in two voices. The first time Juli Baker saw Bryce Loski, she flipped. The first time Bryce saw Juli, he ran. That’s pretty much the pattern for these two neighbors until the eighth grade, when, just as Juli is realizing Bryce isn’t as wonderful as she thought, Bryce is starting to see that Juli is pretty amazing. How these two teens manage to see beyond the surface of things and come together makes for a comic and poignant romance.

This book took me by surprise. I did not expect to enjoy it as much as I did. There were so many moments where I would laugh out loud and there were other moments where I would just want to disappear in to the ground for a character out of embarrassment, but I enjoyed every second of it. By the time I had flipped to the last page and saw a blank sheet at the end of the book, I felt sad it was over. I was wishing for at least a 100 more pages. The two main characters, Bryce and Julianna, were both lovely in their own ways and I absolutely loved them both.

The relationship between Bryce and Julianna was very well developed. I enjoyed watching their relationship shift in different directions as each of them grew older and experienced different things. In the book, Bryce and Julianna's perspectives are alternated one after the other starting with Bryce and ending with Julianna. For each event that happen, the reader was able to hear two sides of the story and Van Draanen did a spectacular job at this. It really just shows how things are not always as they appear and that people interpret things differently. Van Draanen knows how character development is supposed to be done the right way. I greatly appreciated the way the main characters changed once they went through middle school. It made the story more realistic because middle school years (as we all know) are the ones where people begin to change the most.

I also appreciated the inclusion of some sensitive topics in the novel and how they were dealt with. In the book we meet Julianna's uncle who is considered "retarded" because he is mentally and physically challenged. It was interesting to be able to read about how someone like Julianne's uncle can affect a family. The book really did well to portray the social impacts of having to care for someone who is mentally ill or even being related to someone who is mentally ill. It was interesting to see how Bryce, Julianne, and the other characters reacted to this subject.

All in all this is now one of my favorites. It is a very quick and easy read, but is not lacking in depth or substance. I would recommend this book to anyone who enjoys realistic fiction.