Review: How I live Now by Meg Rosoff 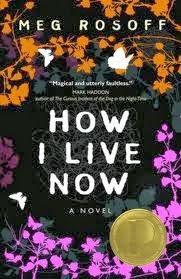 Definitely a very interesting book! I finished it a few days ago and it was a very quick but meaningful read. Now I jumped into this book with little to no knowledge about how its contents were going to fair and I was pleasantly surprised. The book is told in first person by the main character Daisy and she narrates her experiences surviving during a war with her cousins in England.

The book starts off rather quickly at a very high point. Basically Daisy is picked up at the airport by her 15 year old cousin Edmond (whose name I love) and when she arrives at their home she meets her other cousins Isaac who is Edmond's twin, Piper is nine at the time, and Osbert the oldest. Later she also does meet her Aunt but soon the Aunt has to go on a business trip and is quickly eliminated from the main story. For about a quarter (or more) of the book all five of these kids are happily living home alone and having the best of times while a war is gearing up all around them. Of course they were not oblivious to the fact that bombs were being dropped in London urban areas and armies were consuming the city but since they lived in the country area, it does not really hit them until later on. So yeah, the first part of the book was just a happy times with summer days filled with swimming in the lake and camping in barns. There was even a romance that sparked between Edmond and Daisy which I will admit kind of turned me off them being cousins and all. But it was sweet (I guess) but again Edmond was another mysterious male character along with his brother Isaac. My favorite character had to be the very talented Piper though because she was just the sweetest but also most enduring nine year character I have ever read about in a book.

I always knew this book would take turn down hill and I expected a rather steep way down because the first quarter of the book as a said was JUST TOO HAPPY. I literally just found myself waiting for something terribly bad to happen and I guess you could say I received what I expected. The writing also was kind of different from what I have been reading recently which seemed almost childish at the time and in the beginning the difference was very noticeable but after about the first 10 pages I quickly adapted to the writing style and it actually added a lot of personality to our main character.

All in all I believe I gave this book a 4 out of 5 star rating on goodreads. At first I was tempted to give it 3 out 5 stars, but I really did enjoy the ending and the characters, so that is what bumped up the rating for me. I do recommend this book if you would like a really nice short book to enjoy.

Feel free to comment down your thoughts below and any requests you have. Want to know what I am currently reading? It is Switched by Amanda Hocking. Check out my goodreads in the link below to stay updated.
https://www.goodreads.com/BlueBooksandButterflies

Have a spectacular day!