Disclaimer: This was one of my first reviews on this blog that was created two years ago. It is not as great as a reviews as I am usually capable of but I will keep it up for nostalgic reasons. I hope you like it. 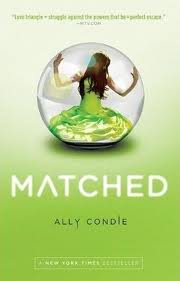 The book starts out with a girl named Cassia that lives in a society where they make all the choices for you. They tell you what job you will have, when you will die, what you will eat, and who you will marry. Cassia has reached the age for her to get her match, or the person she will marry in the future, to be revealed. She was certainly excited when they told her it was her best friend, Xander. Then one day when looking at information given by the society on Xander, for one a split second, she sees not Xander's face, but another boy's, Ky. So pretty much the book is about her trying to figure out who is meant to be with, and who she loves.

I would give the book a 4 out of 5 stars. Mostly because I did have some cons, but I all in all enjoyed it.

The book described a lot of the rules of the society and how the society operates in general, which I liked. I also liked how it explained little bits and pieces of how the society came to be even though, it did slow down the place of the story. The thing I didn't like is that Cassia's love for Ky almost came out of nowhere. He was at first kind of just there, and then all of the sudden Cassia is thinking she might be in love with him. I also kind of wish she had stayed with Xander. Ky is great and all, especially being an aberration, but I just had more empathy for Xander. Besides that, I loved the book, the story line was great, and it was an easy read.

I would definitely recommend this book to any one who wants a nice, light, dystopian novel to read. Crossed is the second book in the Matched Series and I am looking forward to reading it.